Safety is the number one concern for driving cross-country. Our dogs are notoriously rambunctious in the car and we feared having to battle to keep them in the backseat while driving on a busy highway. I researched backseat barriers and travel harnesses at length.

The harnesses didn’t appear to be a good option for us because we would have three dogs in the backseat for days at a time. We didn’t want to limit any of their sleeping options; like the floor of the backseat. We didn’t know if they would tangle themselves while racing from window to window, and we didn’t have time to experiment. So, instead, we opted to install a backseat barrier. Being cost-cautious and of the mindset that any visual barrier would deter our dogs, I chose a mesh one with buckle fasteners.

We did test drives using the barrier with success in our home town. However, once we boarded the car with our luggage, everything changed and the dogs became more aware of every weakness in our system.

Lesson Learned: Do Your Research

If I had it to do over again, I’d gladly shell out the extra cash for a solid barrier properly installed in the car. Within the first 5 minutes, Gatsby and figured out how to maneuver into the front seat, the other two not far behind. We had to sacrifice some shoelaces to shore up the weak points. 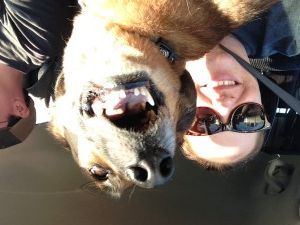 We found a large cup that fit snuggly into the backseat cup holders. Every time we stopped we filled up the cups in the back and the dogs could drink whenever they needed to during the ride. It was messy, but effective.

If you can, leave enough space in your luggage for 1 gallon per 3 days of water using the water that your dogs drink at home. I should have taken 9 gallons of water, but I only stashed 3. I assumed I would refill at hotels and stops along the road. 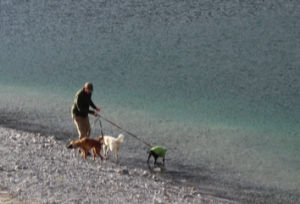 The reason for storing their regular drinking water is to avoid the very slight chance that the dogs would get sick; caused by the different chemistries of water from state to state. We were also traveling through remote areas of Canada and I didn’t know anything about the water quality in that region.

I wish I had taken more water not because of the water quality but because I forgot to refill our gallons more than once. This oversight caused us to need to purchase spring water from the next gas station; an unnecessary expense in added to an already expensive trip. 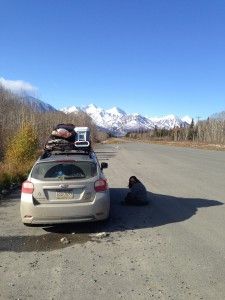 We packed enough dog food for our trip, plus one extra week. We had one week of food left when we got to Alaska, and the two local pet stores don’t sell our brand! Gasp!

Traditionally, to avoid gastrointestinal distress, you should slowly wean your pets off their old food and on to a new food over a period of 1 to 2 weeks. I didn’t have that kind of time.

We used the three or four days we had to wean them faster than usual. Luckily, we averted dietary-disaster and the dogs transitioned to a new food without much more than some extra gas. I would’ve appreciated more time to properly research my options and transition to a new dog food. 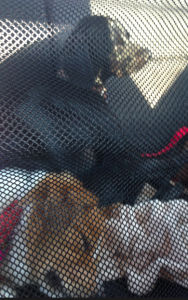 Bring some of the comforts of home. The keyword there is ‘some’. The small collection of toys and dog chews quickly became overkill and a burden in our heavily laden car. Maybe pare it down to one favorite toy or chew per dog plus a thin blanket.Leashes & Identification On At All Times

I let my guard down. I was tired after long days of riding in a car. I checked us into the hotel, entered the room, removed the dogs’ leashes and got ready for bed. I forgot, however, that my husband would be bringing some of the luggage into the room in a few moments. 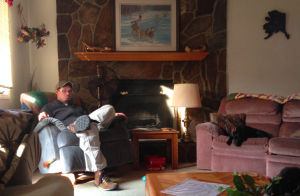 The card reader beeped and the door opened. In a blur, all three dogs were racing down the hall into the lobby and towards the front door before we had time to react!  One of my dogs is skittish and the first slight noise sent her scurrying back to me where I held onto her collar. My husband ran after the two excited escapees and was able to herd them back into the hallway where I could lure them back into the room with desperate offerings of treats and food.

I don’t like to think about losing my dogs, but I’m prepared. Microchips are great and I have heard a lot of wonderful stories about microchip reunions, but the remote areas I was traveling through wouldn’t have regular access to microchip readers, or even internet access. I relied on a backup of up-to-date ID tags. I had just my dog’s name and our cell phone numbers. 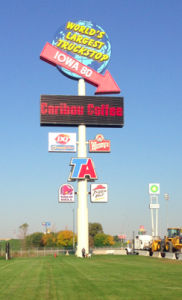 Time Zones May Change, But A Dog’s Internal Clock Doesn’t

We travelled across 4 time zones, but our dogs were still hungry at noon instead of 4:00pm. Prepare for some transition time.

I had the misfortune of coming down with mild food poisoning during our trek through Canada. I would have been in trouble if I were traveling alone. Thankfully my husband did not suffer this fate and was there to help with the dogs and all the added stress that they bring to a cross- country car trip.

Come visit our pet supply store in Brentwood, TN specializing in quality food, treats, and supplies for cats and dogs.